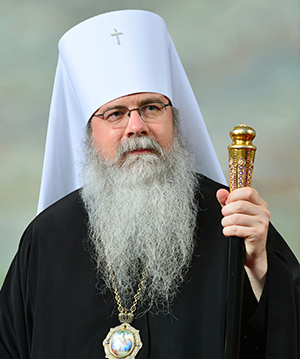 His Beatitude, the Most Blessed Tikhon

Metropolitan of All-America and Canada

His Beatitude was born in 1966, the eldest of three children born to Francois and Elizabeth Mollard. After brief periods living in Connecticut, France, and Missouri, he and his family settled in Reading, PA, where he graduated from Wyomissing High School in 1984. In 1988 he received a Bachelor of Arts degree in French and Sociology from Franklin and Marshall College, Lancaster, PA, after which he moved to Chicago. In 1989 he was received into the Orthodox Church from Episcopalianism and, in the fall of the same year, he began studies at Saint Tikhon’s Seminary, South Canaan, PA. One year later he entered the monastic community at Saint Tikhon’s Monastery as a novice. He was awarded the Master of Divinity degree from Saint Tikhon’s Seminary in 1993, after which he was appointed Instructor in Old Testament and subsequently Senior Lecturer in Old Testament, teaching Master level courses in the Prophets and the Psalms and Wisdom Literature. He also served as an Instructor in the seminary’s Extension Studies program, offering courses in the lives of the Old Testament saints, the liturgical use of the Old Testament, and the Old Testament in patristic literature. He collaborated with Igumen Alexander `{`Golitzin`}`—now Bishop of Toledo and the Bulgarian Diocese of the Orthodox Church in America—in the publication of “The Living Witness of the Holy Mountain” by Saint Tikhon’s Seminary Press. In 1995, he was tonsured to the Lesser Schema with the name Tikhon, in honor of Saint Patriarch Tikhon, Enlightener of North America. Later that year, he was ordained to the Holy Diaconate and Holy Priesthood at Saint Tikhon’s Monastery. In 1998 he was elevated to the rank of Igumen, and in 2000, to the rank of Archimandrite. In December 2002, he was named Deputy Abbot of Saint Tikhon’s Monastery. Two years later—on February 14, 2004—he was consecrated to the episcopacy at Saint Tikhon of Zadonsk Monastery Church. On May 9, 2012, he was elevated to the dignity of Archbishop. On November 13, 2012, Archbishop Tikhon was elected Primate of the Orthodox Church in America at the 17th All-American Council in Parma, OH.