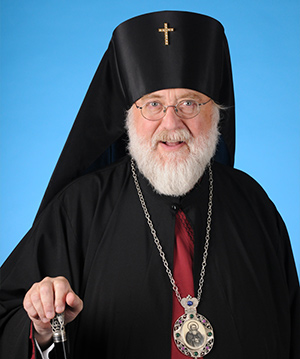 Archbishop of San Francisco and the West

Archbishop Benjamin was born in 1954 and was baptized and Chrismated at Holy Virgin Mary Cathedral, Los Angeles, CA on April 27, 1972. In 1982 he was awarded a Master of Divinity degree and Certificate in Liturgical Music from Saint Vladimir Seminary. A prolific musician, he served as choirmaster at parishes in Detroit, MI and Los Angeles and as chairman of the Orthodox Church in America’s Department of Liturgical Music. He was ordained to the Holy Diaconate on November 15, 1987 by Bishop Tikhon at his home parish, which he served for 10 years as deacon and youth and education director. The following year he was tonsured a riasophore monk by Bishop Tikhon and further tonsured to the lesser schema by Archbishop `{`now Metropolitan`}` Herman at Saint Tikhon Monastery, South Canaan, PA. In 1991 he was elevated to the rank of archdeacon. On July 19, 1997, he was ordained to the Holy Priesthood by Bishop Tikhon. In 1999, Igumen Benjamin was was transferred to the Diocese of Alaska, where he served as dean of Saint Innocent Cathedral and later as administrative dean of Saint Herman Seminary, Kodiak, AK. He was elevated to the rank of archimandrite in 2002. In January 2004 he was reassigned to Holy Virgin Mary Cathedral, Los Angeles, and appointed Chancellor of the Diocese of the West. Archbishop Benjamin was elected to the episcopacy by members of the Holy Synod of Bishops at their Spring Session in March 2004. His Beatitude, Metropolitan HERMAN presided at the consecration of Archbishop Benjamin `{`Peterson`}` to the episcopacy at historic Holy Trinity Cathedral on Saturday, May 1, 2004. Archbishop Benjamin was elevated to the rank of Archbishop on May 9, 2012.